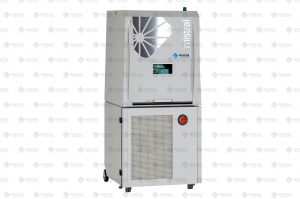 When NWL laser technologies introduced the MISTRAL marking cabin 20 years ago, it was a trendsetting product in the field of compact marking systems.

NWL, which was acquired by PHOTON ENERGY in 2011, developed the system because new diode pumped solid state lasers (DPSS) made it possible to set up ever smaller and more compact marking cabins.  Up until then, flash lamp-pumped Nd:YAG lasers were predominantly used for marking solutions. Because the laser head of those flash lamp pumped systems was bigger than those of DPSS solutions, the marking cabins’ size which is conditioned by the dimensions of the laser source were very large and not very handy at that time.

Not only were the novel diode pumped Nd:YAG lasers much shorter, but also considerably more power efficient. Because of that high efficiency our engineers were able to facilitate the cooling using a very small compressor unit.

The NWL team combined all of those advantages the new laser technology provided to create a new marking unit concept.

Because the laser head was shorter and less heavy than before, it could be mounted on a z-axis. Using this feature, different component part heights could be sett off by the laser software.

The laser marking cabin was designed as compact as possible. It was set on the basic unit which was housing the cooling as well as the electronics. The whole marking cabin could be pulled towards the user. This made for a more ergonomic seated work position.

On top of that the cabin could be separated from the base unit to enable an even wider range of possible applications.

MISTRAL revolutionised laser marking systems – with features like flexibility and cost efficiency: Mistral which were initially set up as stand alone stations could easily be automated using already existing components.

Since then we continuously improved the system. Our concept still offers a maximum of flexibility.

Today every imaginable application can be realised with our range of different laser sources that can be integrated into the MISTRAL laser marking unit.